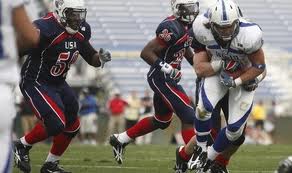 INTERNATIONAL BOWL TO REACH A WORLDWIDE AUDIENCE
VIA LIVE WEBCAST ON WEDNESDAY, FEBRUARY 1

American football fans around the world will be able to tune in live via a webcast at www.USAFootball.com/InternationalBowl to watch the IFAF World Team take on America’s Under-19 National Team in USA Football’s International Bowl on Wednesday, February 1.

The international webcast – which is available only outside of North America – will broadcast all the action live from The Kelly Reeves Athletic Complex in Austin, Texas.

Fans in the United States and Canada can tune in to CBS Sports Network’s live television coverage of the International Bowl and can access the broadcaster’s Channel Finder at www.cbssportsnetwork.com.

The game kicks off at 5pm local Central time, which will be midnight in Central Europe, 8am the following morning in Tokyo, Japan and 10am the next day in Sydney, Australia.  The webcast will be archived and will be available for post-event viewing in all territories outside North America.   In the United States and Canada fans can view the game 72 hours later on the USA Football website.

“We are delighted that American football fans around the world will be able to watch our best junior talent aged 19 and under take on America’s finest,” said IFAF President TOMMY WIKING.  “The game has players and coaches representing 20 countries whose participation will create great interest in their homeland and inspire other young players to compete at this level.

“Regardless of whether or not their country has players on the IFAF World Team roster, people who are passionate about American football in the more than 60 countries IFAF represents should all be excited to tune in to watch the webcast.”

In 2011 the IFAF World Team narrowly lost 21-14 to Team USA at Westlake High School in Austin, and in 2010, the Americans were held scoreless until the final play of the first half before going on to win 17-0 at Lockhart Stadium in Fort Lauderdale.

The IBN Sports-powered webcast will show the CBS Sports Network production and will stream exclusively through www.USAFootball.com/InternationalBowl.  Calling all the action will be CBS Sports Network play-by-play announcer James Bates, who will be joined in the booth at the Kelly Reeves Athletic Complex by analyst Doug Chapman and Brian Jones reporting from the sidelines.

The game will be available to military services around the world on the American Forces Network (AFN).

IFAF World Team rosters and player bios along with features, photos, video and more information about the 2012 International Bowl can be found at www.IFAF.org and at www.internationalbowl2012.com.
About IFAF
The International Federation of American Football (IFAF) unites 62 countries on six continents through a burgeoning international sport.  With national football federations in existence for more than 75 years, IFAF was created in 1998 to organize and further develop the game through international cooperation and global competition. The IFAF office is located near Paris, France.

We use cookies to ensure that we give you the best experience on our website. If you continue to use this site we will assume that you are happy with it.Ok